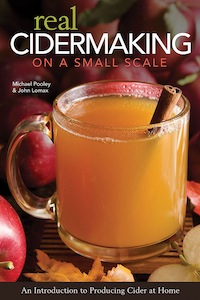 Real Cidermaking on a Small Scale by Michael Pooley and John Lomax is a good introductory book on cider making. It is short with lots of photographs. One feature I like that is not in the other cider books is a pair of flowcharts on the steps for making either naturally conditioned sparkling cider or still cider.

Pooley and Lomax promote what Lea calls a ‘naturalistic style’ of cider making. They prefer to not add sulfur dioxide, but do recommend using commercial yeast. They note that if the juice is processed well and has enough acidity, there is a low chance of bacterial infection in the time before the yeast dominates. This is easy for them to ensure, because this book is primarily aimed at very small batches where the cider maker chooses, washes, and presses the apples themselves. They include a plan for building a small slatted basket cider press. They note that most ciders will end up clear without filtration or fining. An interesting idea that I learned from this book is that wine boxes are an inexpensive way to store still cider in a refrigerator.

Because Real Cidermaking on a Small Scale is an American edition of a British book, the terminology is a bit different from the American books, but it is well written and easy to understand. You just may need to learn a few more terms when you look for supplies locally. There are some clip-art-ish illustrations that don’t add anything add anything to the book, but it is mostly well illustrated and includes lots of photographs. It is distinguished from many homebrewing books because this cider making book has a professionally typeset and designed look. I like that Pooley and Lomax are consistent with the terminology that cider means the fermented variety; before fermentation it is apple juice. This demonstrates that the corruption of the term cider during Prohibition hasn’t spread out of the United States.

Real Cidermaking on a Small Scale is a good and very short introduction to cider making. If you have access to apple trees and don’t want to read much, this is a good starting point. If you are like me and want more technical details to help make decisions, you’ll end up reading Craft Cider Making by Andrew Lea soon after this book. If you are more interested in cider’s history and styles, read Ben Watson’s Cider, hard and sweet.

This is the third review in a series on cider making books.