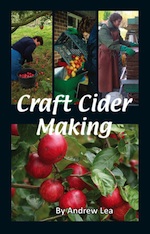 Andrew Lea’s Craft Cider Making is the best book I have read on producing your own cider from fresh apple juice. It is an excellent introduction to making traditional ciders. As a food biochemist who spent 13 years in cider related research, the author is probably the most qualified author in this series. This background contributes to making this the most scientifically accurate of the cider books I am reviewing. This doesn’t detract from the readability of the book, Craft Cider Making is as well written as any of the other books.

Since this book is from the UK, some of the terminology is slightly different from what is used in the American books, but in the areas that matter this one is more correct. Since cider came to America from England there isn’t too much of an adjustment, you just need to know some small changes such as calling 4.5 liter bottles demijohns; American homebrewers usually use the term for bottles over 25 liters.

Being from the UK, you also have to recognize that the apple varieties are different than the ones we have in the US. Since the principles are the same, this just means you should just treat the section on apples as an introduction to terminology and concepts, not particular cultivars. You can then choose apples with similar characteristics. Or do what I did and just use the fresh juice available at a local orchard.

Craft Cider Making is focused on making traditional ciders. It includes a short chapter on cultivating apples, but only details needed for cider making; if you want a book on growing cider apples read an orchardist’s book. This is an example of the focus helps keep the book short and on track. Lea provides a good appendix of further resources, including brief reviews of other cider books and recommendations for books on cultivating apples.

While some of the other books downplay the use of sulfur dioxide in cider, Lea recommends some sulfiting. He notes that the use of sulfite is actually traditional, it’s just that in earlier times it was done by burning a sulfur candle or string in the barrel prior to filling it instead of adding Campden tablets. An interesting historical note from this book is the fact that sparkling beverages began with cider in England several decades before the famous start of champagne production in France. This was due to the location of the invention of the process necessary to make the high quality bottles required to maintain pressure.

Craft Cider Making is the best cider making book I have read. If you want a reference to use when making your own cider, this is the book I recommend buying. If you are more interested in learning history and styles of cider, read Ben Watson’s Cider, hard and sweet.

This is the second review in a series on cider making books.

In addition to the book, Andrew Lea has a good website.