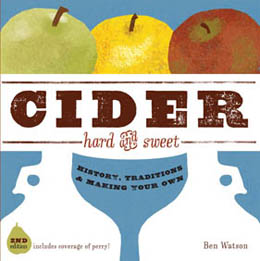 The first book I read on cider was Ben Watson’s Cider, hard and sweet. This book is an excellent starting point for Americans only familiar with the pasteurised and preserved “cider” found in grocery stores in the fall. It provides a good introduction to the styles of cider produced around the world and includes the best history of cider I have read.

To avoid the problem that most Americans think of cider as an unfermented beverage, Watson adds a new term. His preferred term is “real cider” for fresh apple juice that has not been pasteurized or preserved. Both real cider and the cloudy grocery store kind are considered sweet cider. The sweet cider distinction leaves the transparent juice from grocery stores called apple juice. To fit this naming scheme, traditional cider must be called hard cider when the meaning is ambiguous.

Because America’s “cider culture” died decades ago, Watson includes a chapter on tasting cider. I think this section is more in-depth than needed, but it is probably beneficial for people unfamiliar with conducting experiments. The glossary of cider-tasting terms was helpful for learning to describe the flavors of ciders.

Watson includes two chapters on making your own cider. These are an okay starting point, but if you are interested in cider-making, I recommend Andrew Lea’s Craft Cider Making. These two chapters contain my only real complaints about this book: a misleading representation of yeast reproduction, and some incorrect terminology. Watson conflates malolactic and secondary fermentation. These are actually different processes. Secondary fermentation is caused by the continued action of the brewing yeast (typically Saccharomyces spp) after moving the cider off its lees left by the primary fermentation. Malolactic fermentation is a separate process involving lactic acid bacteria (eg Lactobacillus spp, Pediococcus spp). Secondary fermentation is still converting sugars to alcohols, malolactic fermentation is converting malic acid to lactic acid. Since I hadn’t yet read Lea when I started my 2011 ciders, Watson provided much of my original knowledge base, and my results have been good.

The history sections of Cider, hard and sweet led me to some conclusions about my previous perception of cider. Part of my original misconceptions were due to the fact that in the United States cider is often called “hard cider”. This gave me the impression of cider being a distilled beverage instead of a relatively low alcohol fruit wine. The former popularity of applejack contributed to a negative image of cider. This is due to the affects of the fusel alcohols and methanol that are concentrated when applejack is created from cider by freeze distillation. The adulterated drinks sold as “cider” during the industrial revolution also contributed to this incorrect image of true cider. Watson’s history of cider does a good job of correcting these misconceptions, as well as creating an appreciation for the history and styles of cider in America and Europe.

As for the production of the book: it is more professional than many of the other cider and brewing books I have read, but I found the typography and layout annoying. I also dislike the silly use of BCE. This is an unnecessary complication of the language: there is no good reason not to just stick with BC.

Cider, hard and sweet does a good job of introducing all aspects of cider production from choosing apples through cooking with cider. Overall, this is a good introduction for someone unfamiliar with cider, but it is no longer my first recommendation for a book on cider making. If you are unfamiliar with cider, start here; if you want to make your own, continue with Andrew Lea’s Craft Cider Making.

This is the first review in a series on cider making books.