New fuel economy standards have finally been issued. The long overdue update will rase the CAFE standards from their 1990 levels. This will be beneficial for the environment, health, national security, and will save car owners money:

Here is a plot of historic US fuel economy along with the new standards. The historic data is based on the efficiency of cars sold each year and car survivability and miles driven by age. The plot shows all cars on the road each year, not just those sold that year. The future lines are directly from the new standards. Because the number of new cars sold is large, and new cars are driven more than older cars, the plot ignores the small hysteresis for future fuel economy. Data from 2005 to 2010 is estimated. 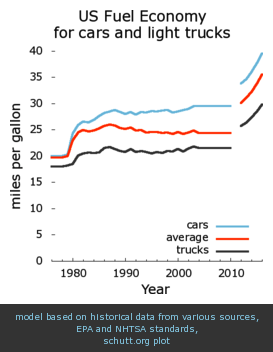 The various documents related to the ruling contain lots of interesting and useful information. For example, a good compilation of existing technologies that improve fuel economy, with an analysis of cost and efficiency changes. Some of these changes reduce manufacturing cost and improve fuel economy. I’ll probably use these reports frequently. They contains lots of information that I previously had gathered from many sources, as well as some I had calculated or planned to calculate.