I’ve been doing some research into car fuel economy and how easy it would be to increase the efficiency of cars. Two things I needed to find were how long cars last and how many miles they are driven. I found an interesting Department of Transportation study with equations for this information. Car lifetimes are expressed as percent surviving by age. There is initially a slow decline in the number of cars from a modelyear on the road, then a quick drop: 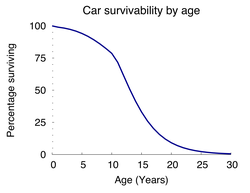 The number of miles driven in a year decreases with the age of a car: 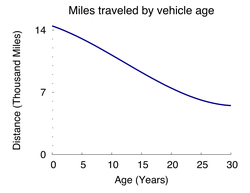 I combined these two equations to find the percentage of all miles driven in a year for cars by age. The combination of these two factors decreases more rapidly than either alone: 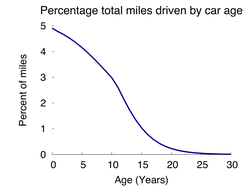