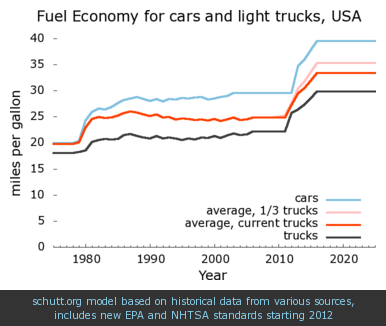 The definition of light truck in the CAFE standard includes many SUVs and vans. Pickup trucks, SUVs, and vans made up around half of the passenger vehicles sold in recent years. The orange line shows the expected average fuel economy for the current mixture of trucks and cars. Keeping this mix of light trucks and cars will result in the average fuel economy only reaching 33.7 miles per gallon. Reaching the target of 35.5 mpg requires the fraction of new vehicles sold classified as light trucks to drop from one half to around one third. This is shown by the pink line.

From my estimate of the total number of cars and miles driven, I can estimate the gasoline burned, giving the CO2 produced by all cars and light trucks on the road: 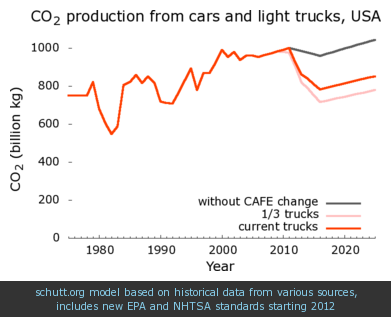 This shows the expected change with and without the new CAFE standard. For the base scenario (without the CAFE update), I included the expected change in the fraction of trucks sold. Notice that after the CAFE standard is constant, the expected CO2 output resumes its climb. This is due to the predicted population increase, with the number of cars per capita remaining constant. The CAFE update will bring the expected CO2 production from cars to below 2000 levels for nearly three decades, when population growth catches up with efficiency improvements. 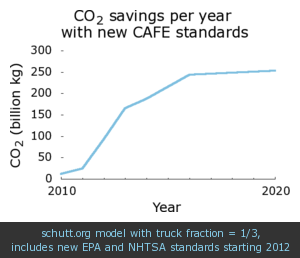 Notes: The numbers from 2005 to 2010 are estimated based on 2004 levels. These years are estimated because accurate statistics are released a few years late. The scenarios not labeled “current trucks” include a decrease in the truck to car ratio starting with 1:1 in 2008 and reaching 1:2 in 2016. The data before 1979 isn’t as accurate as the 1979 to 2004 data, but the effect is negligible after the early ’80s due to the high turnover rate of miles driven.