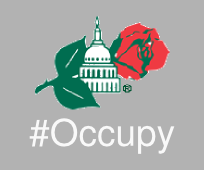 There is an interesting discord between two protest groups that have been in the news in the past few months.

Many of the most vocal supporters of the annual March for Life—now in its 38th year—are among the most vocal opponents of the Occupy movement. They claim the Occupiers are just ‘whiny protesters’ taking the ‘lazy’ way to stand against ‘perceived injustices’. They complain that the Occupy movement gets disproportionate press coverage, and that the March for Life doesn’t get the coverage it deserves. Similarly, the Occupy folks complain about poor media coverage. Both groups perceptions of media coverage are partially an example of the hostile media effect, but the animosity raises a clear problem:

The philosophies that give rise to the problems that the Occupy movement is protesting are the same philosophies behind the existence of legal abortion in the United States.

The problems combated by both groups are rooted in philosophies that celebrate avarice to the extent that the complete devaluation of others is encouraged.1 Whether the majority of those in either protest group recognize this underlying commonality is another story; it appears that many don’t, but a little mutual philosophical examination could improve the progress of both groups.

Why the antagonism instead of cooperation? The main anti-abortion2 advocates concentrate exclusively on one narrow effect of the root problem: abortion. This single-minded effort has worsened other consequences of the celebration of avarice. This is because the concentration has historically led to strange political alliances: instead of working with groups that fight other problems with the same root, they typically endorse the most vocal champions of avarice, with a claimed disapproval of abortion as the only condition for endorsement. Since this philosophical compromise has continued for decades, it appears that the most vocal anti-abortion advocates are actually unaware that many of the positions held by supposedly anti-abortion politicians are actually at odds with philosophies that necessitates the pro-life stance. This dissonance is likely partially responsible for the rise of those in the anti-abortion movement who are no longer concerned with social issues. It is also a consequence of a philosophical background that often appears to only be acquired in order to have rational arguments to back their initial, and correct, emotional revulsion at abortion. This disconnect has unfortunately led to the complete dismissal of the significance—and even the existence—of the injustices the Occupy movement protests, and to the ridicule of potential allies.

The Occupy movement is protesting a wide range of problems with the same root, but their goal is explicitly to raise awareness, not to propose specific solutions. This has the benefit of creating a wide base, but this also means that many are likely to miss the other implications of their implicit recognition of the problem of avarice. Many may only recognize the effects without connecting them to their root cause. This is one reason the movement is partially only in protest against obvious problems such increasing income inequality partially due to regressive taxes, unfair representation due to unlimited corporate spending in elections and the doctrine of corporate personhood, and so on. A more examined and coherent philosophy would add to this an effort to educate the public on the root causes of the problems, which are also the root causes of legal abortion. To be fair, while many in the movement appear to be just reacting against the bad economy caused by the celebration of unrestrained avarice, a significant portion of the Occupy supporters have certainly done more philosophical introspection than those who are causing the problems.

The Occupy movement has successfully raised public awareness of problems that even in the first years Great Recession didn’t receive enough attention. The March for Life plays a role in bringing attention to the problem of legal abortion, though it seems to be mostly a motivational exercise for those involved to do something at other times of the year. Neither movement is perfect, but that doesn’t mean that they aren’t both beneficial. The common philosophical necessity should make the groups allies. Unfortunately, the most popular interactions I have seen are antagonistic. Real change to solve the problems caused by the celebration of avarice—protested by both the March for Life and Occupy—can’t come without correcting the mistaken philosophy that necessitates both groups, but some progress can be made.