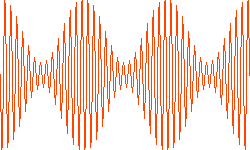 While sitting in the car waiting to give my sister a ride back from a volleyball game, I came up with a new road trip game. There was nothing interesting on the radio stations I usually listen to, so I switched to AM and started scanning. Unsurprisingly, there wasn't anything interesting on. I heard a few questionable bible lessons, some ballgames, the usual political shows, a French broadcast I could almost understand, bad music, and lots of advertisements. I decided to listen to one of the political shows for a while. After a few minutes I got tired of the false 'facts' and incoherent reasoning, and switched to another talk station. It didn't take long to hear misleading statistics, so I tried again. I made it around the dial three times before the team made it out of the locker room.

This gave me the idea for a new car game: AM Statistics or Check your arithmetic.

If you are good, you won't have to stay on any one station for long. Try to be the first one to spot an error; or to play alone, see which program requires the fastest station switching.

If you have read How to Lie With Statistics, you'll have a hard time not finding these errors. These are usually pretty easy to spot even without much subject familiarity. If you know the subject or statistics, there will be plenty more.

To make the game go even faster, you can expand the rule from errors in math and stats by including logical errors. You'll probably have to keep your hand on the dial if you are playing Find the Fallacy.

It shouldn't take too long to make it around the dial. You could even expand the rules to include any factual errors. If you have passed a history or science class, this will likely be too easy. This game works even better if you have the misfortune of watching cable news.