If you’ve paid attention to national political news at any point in the last 18 years, I’m sure you’ve heard variations on the saying ‘safe and legal, but rare,’ when discussing abortion. Beyond the fact that a procedure where fewer than half of the patients survive can never be considered ‘safe,’ how is ‘rare’ defined? From the folks who use the ‘legal, safe, and rare’ statement, you’d get the impression that abortion is already fairly infrequent, and that they’d just like to reduce the numbers a little further. I figured they understated the frequency, but I never examined the data myself. Then I saw a t-shirt with the statement ‘1/4 of my generation is missing’:

This is much higher than I expected, so I decided to check the numbers myself. I found the data on the CDC website and plotted it along with moving averages to define ‘generation’: 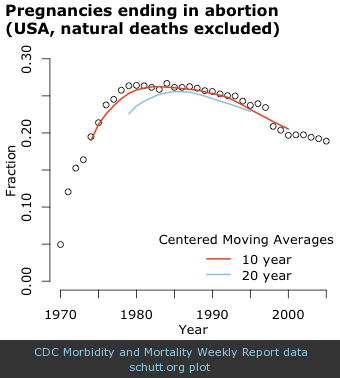 Huh. That’s much higher than I expected. I’d figured it would be around a tenth that rate, and at most up to half that rate. These higher than expected numbers mean that one-quarter is a reasonable estimate. Depending on how ‘my generation’ is defined, the one-quarter figure may be a little high, but it is at minimum one-fifth. Under any reasonable definition, there is no way I’d consider 1/5 to be ‘rare.’ It’s a stretch to call one-tenth rare. I’d hesitate to call 1/36—the probability of rolling snake eyes—rare. I’d consider a general definition of rare to start around 1/500, approximately the probability of drawing a flush in poker. For diseases, the NIH uses a definition somewhere around 1/1500. Even if the abortion rate in the USA is lowered to one sixth the current level, it still wouldn’t fit in the loosest of these definitions of rare. This means that, even for a generous definition, we have a long way to go before abortion could be considered ‘rare.’ It’s worth noting that the pro-abortion politicians mostly stopped using the ‘rare’ statement a couple years ago, showing that they were probably never serious about it.

Note: Data are from the US Centers for Disease Control and Prevention. The CDC MMWR abortion reports are released at the end of November with a three year lag. ‘Fetal loss’ other than induced abortion is excluded from the data I used in the plots. The numbers include both surgical and medical (non-surgical) abortions. Data is abortion rate per 1000 live births, I converted it to a fraction to clarify the plots. The full report is worth a look. Since it is split between two tables in the report, here is a plot of when during a pregnancy abortions are performed: