This week I read a USA Today story (from the first screen of Tuesday’s homepage) that made a couple common mistakes. The newspaper’s mistake is basing a story on a press release from an advocacy group, instead of doing an independant story based on the study itself. As frequently happens, the press release commits a common error that is not in the study itself. 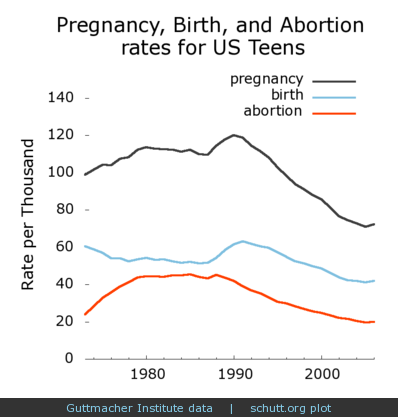 The story is based on press release from the Guttmacher Institute, an abortion advocacy group, originally a division of the Planned Parenthood Federation of America. I have no reason to doubt the published numbers, but the press release makes the mistake of over-interpreting the data to agree with predetermined conclusions. The annual change in the numbers from 2005 to 2006 isn’t large enough to draw a conclusion, yet the press release attributes the change to policies they oppose. This is what Darrell Huff would call playing up numbers, and the wording could be considered cherry-picking. This is exactly the same kind of mistake I see every slightly cool day during the summer when someone (often in the news) claims that it disproves anthropogenic global warming. While it is possible that the Guttmacher Institute’s conclusion is correct, the evidence is not yet strong enough to make a conclusion. The Guttmacher Institute’s press release presents an explanation for 1995 through 2006, leaving out an explanation of the data from 1986 to 1995. This is a problem because there is a larger unexplained peak in 1988 and the decline begins in 1989, not 1995. At the present time, without presenting stronger evidence, an equally plausible explanation is that the 2005 to 2006 change merely represents the expected annual fluctuations around a steady state, and that the slow in the decline is simply due to approaching the steady state. To make their conclusions will require a longer trend, and to explain the prior changes, not just assume the change is due to policies they oppose. It is important to remember to actually look at data and to know that the world is more complex than advocacy groups pretend. 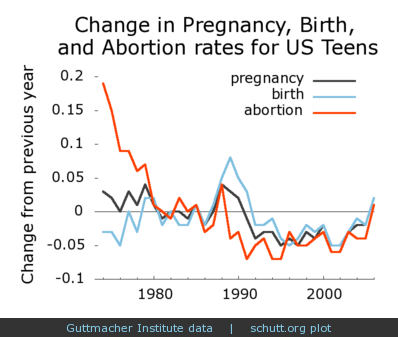 Update 2010-02-02: A new study published in the Archives of Pediatric and Adolescent Medicine provides evidence that the Guttmacher Institute’s attribution of the changes in the abortion rate is likely incorrect. Unlike the Guttmacher Institute’s conclusion, this is published in a peer-reviewed journal. (Found through a story in the Washington Post.)