One important issue not receiving enough attention is efficiency increases forced by population growth. The Earth is a finite system: resources do not grow as population does. This means that to maintain the same results (standard of living, &c.) as population grows, efficiency must increase. This is important for issues such as land use, food production, water resources, and energy. 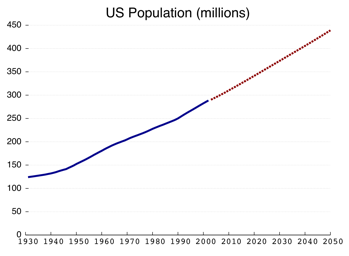 The world population is currently around 6 700 000 000. In the next four decades, it is expected to reach 9 500 000 000. The US population is around 306 000 000, and is expected to be around 440 000 000 by 2050. So if we assume we are using all land available for food production, the efficiency of the land usage must be increased by a bit over 1.4 times to feed everyone in 2050. This makes the generous assumption that the land is currently being used sustainably. In reality, the food production efficiency must be increased faster to balance the resources lost to non-sustainable land use practices. The results in other categories are similar.

I am particularly interested in energy usage and transportation efficiency. For example, cars and trucks in the US. The current CAFE (Corporate Average Fuel Economy) standards dictate that the average fuel economy for all new cars and trucks in the US is around 24 miles per gallon. The true average of all cars on the road is lower. Accounting for population growth in the US, this combined average must be over 35 miles per gallon by 2050 to maintain current fuel usage. To return to 1990 petroleum usage in 2050, the CAFE standard must be increased to almost 49 miles per gallon.

These efficiency gains merely maintain current standards of living. This is especially important for food. Increases that merely match population growth still leave the same percentage of people without food or clean water. As can be seen in India and China, more people are moving up from extremely poor to poor and middle class. They then eat more and use more of other resources. This increase in living standards necessitates a concomitant increase in the efficiency of resource usage. But even these efficiency increases aren’t enough.

In transportation, food, and water, we are using resources faster than they are replenished. As the population is increasing, the resources available are decreasing. This must stop at some point. All reasonable people agree that it is necessary to move to completely sustainable use of resources. Until we reach sustainable resource usage, we must increase efficiency significantly faster than required by population growth. Gains below this rate merely delay an inevitable disaster. Improvements at this rate–or better–save the world. Do we have a critical mass of reasonable people?