Yesterday I racked and topped off the ciders I’m making from the juice I bought a month ago. All had already fermented to nearly dry. 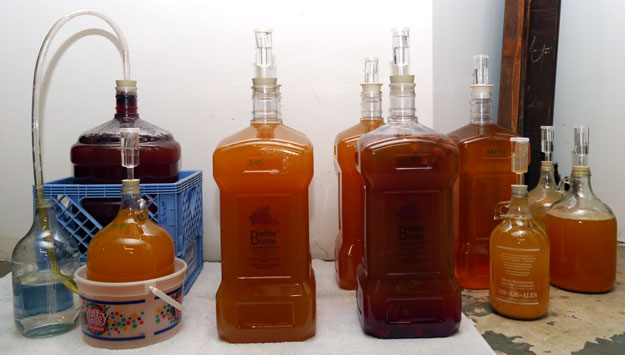 I moved the contents of one of the three gallon carboys of D47 cider into a five gallon carboy, and added one gallon of blueberries that I froze this summer. Before adding the blueberries, I thawed them and crushed them using an applesauce making conical strainer. I topped the carboy off with a bit over a gallon of fresh juice, leaving a bit of headroom. By this afternoon, the cider was vigorously fermenting, so I switched from an airlock to a blowoff tube. I split the three gallon batch of 71B-1122 cider into a one gallon jug and a three gallon carboy. I added twenty-four ounces of frozen red raspberries and some fresh juice to the three gallon carboy of 71B-1122 cider. I chose 71B yeast for this batch, because it should mellow the acidity of the raspberries without the eighteen months of aging that was required for my last batch of EC-1118 raspberry cider.