There are several nearby pawpaw patches, but it has been a number of years since I have eaten pawpaws. Most years that I remember to look for them, the pawpaws seem to go from way under ripe directly to already eaten by animals. This year I checked more often, and I was able to find a few ripe ones before the critters got them. 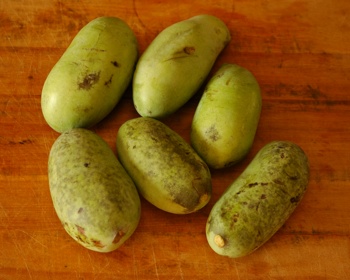 Ripe pawpaws are have a strong and distinctive flavor, and a creamy texture. They taste good plain, but they aren’t a fruit that I want to eat several of at once, as I often do with apples and bananas. Because of the mushy, creamy, texture, I decided to make some pawpaw ice cream. My experiment turned out well, especially when paired with homemade chocolate ice cream. 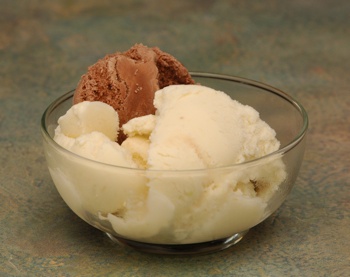 The flavor of the pawpaw is strong enough that it doesn’t take much to make a batch of ice cream. I skinned the fruit and removed the seeds, then ran the meat of the pawpaw through a blender to make it even smoother. This gave me nearly a cup of pawpaw purée. I added milk, cream, and a little vanilla to the pawpaw. After fifteen minutes in a borrowed ice cream maker, I had a batch of excellent pawpaw ice cream. Mmm…