Last week I wrote that Open Access is important because it allows anyone to easily check that news articles match the science paper they claim to be reporting on. Today I was asked to comment on an article that turns out to be an excellent case study.

The paper in question was published today in Nature Climate Change. The paper, “The polarizing impact of science literacy and numeracy on perceived climate change risks” by Kahan & alii, happens to be available on the Nature website, so anyone can read it. It is a clear and accessible paper, so you can evaluate it yourself.

Kahan & alii created a survey to determine if public’s lack of concern about the risks caused by climate change is due to a general failure to understand science or to something else. This is an interesting idea to explore. Misunderstandings of science are often attributed to not having sufficient knowledge and mental skills to properly understand the information available. Kahan & alii call this the science comprehension thesis (SCT). To test the SCT, Kahan & alii devised a survey that covered basic political leaning, basic science knowledge, and some analytical reasoning, in addition to the participant’s evaluation of the seriousness of climate change risk and nuclear power risk.

Instead of a positive correlation of numeracy and science literacy with high estimates of climate change risk, the study found slight negative correlations. That is, those with slightly better scores on the reasoning and science literacy questions gave slightly lower ratings on a 0—10 scale for the question, “How much risk do you believe climate change poses to human health, safety or prosperity?”

The survey results were sufficient to also test the cultural cognition thesis (CCT). This thesis states that the views of others in groups a person associates with have a large impact on a person’s reasoning and analysis of risks to society. The results of the study show that CCT is a better explanation of the perceptions of climate risk in the American general public than is SCT. So among those on the egalitarian communitarian end of the scale, increased knowledge and reasoning abilities is correlated with an increased evaluation of the climate change risk; while for those on the hierarchical individualist end of the scale the correlation is the opposite: 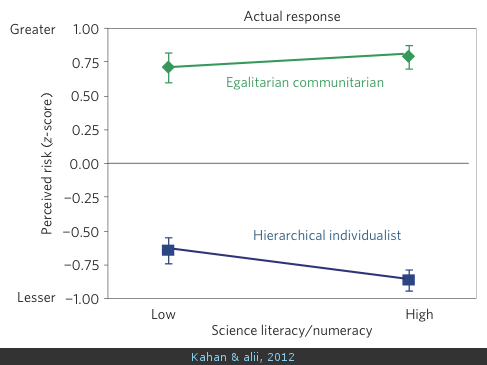 This supports the idea that knowledge and reasoning ability aren’t necessarily enough to make a person believe something counter to what a group they are in tends to believe:

For ordinary citizens, the reward for acquiring greater scientific knowledge and more reliable technical-reasoning capacities is a greater facility to discover and use—or explain away—evidence relating to their groups’ positions.

Basically, for many people peer pressure is more important than scientific evidence.

It is important to note that this study only covers the general public: this isn’t an evaluation of experts in the relevant fields. Across the political spectrum, the experts are nearly unanimous in evaluating the human impact on climate to be a serious to dire risk. This may be in the citations, but there is also the possibility that people higher on the knowledge/numeracy scale will in general provide lower estimates of risk, partially because they are better at thinking of the range of values than others are.

Phew! That’s a longer summary than I intended to write. Oh, well, on to the reporting in question.

The news article I was asked to evaluate was posted in The Register, a British Information Technology tabloid. Given the contents of the Kahan paper, one would expect a headline like, “Yale study concludes public apathy over climate change unrelated to science literacy.” But The Register mangled the story into something completely different, titling Lewis Page’s article: “The more science you know, the less worried you are about climate.” This is clearly an inaccurate representation of both what was studied and the conclusion of the study. Now, it is often the case that the headline is written by a different person than wrote the story, so the two don’t necessarily match. Unfortunately, in this case the story just continues the misunderstanding.

In addition to misrepresenting the study in his own writing, Page misrepresents the study using creative ellipses in his quotes from the article. For example, the third paragraph from the end of the journal article reads (with Page’s version highlighted):

Even if cultural cognition serves the personal interests of individuals, this form of reasoning can have a highly negative impact on collective decision making. What guides individual risk perception, on this account, is not the truth of those beliefs but rather their congruence with individuals’ cultural commitments. As a result, if beliefs about a societal risk such as climate change come to bear meanings congenial to some cultural outlooks but hostile to others, individuals motivated to adopt culturally congruent risk perceptions will fail to converge, or at least fail to converge as rapidly as they should, on scientific information essential to their common interests in health and prosperity. Although it is effectively costless for any individual to form a perception of climate-change risk that is wrong but culturally congenial, it is very harmful to collective welfare for individuals in aggregate to form beliefs this way.

But Page’s story in The Register merely quotes it as:

This form of reasoning can have a highly negative impact on collective decision making … it is very harmful to collective welfare for individuals in aggregate to form beliefs this way.

That’s quite a difference in meaning, especially when Page prefaces it with his own statement:

Given that the profs had assumed from the start that scepticism is wrong, this forced them to the conclusion that simply teaching people more science and giving them more facts and numbers is not a good idea as it will lead them into bad (sceptical) decisions.

This one sentence manages to misrepresent both the background and conclusion of the Kahan paper. But reading the quotes in Page’s article wouldn’t give any indication that this summary doesn’t represent Kahan’s work. Page goes on to claim that Kahan & alii endorse “a communication strategy on climate change which is not focused on sound scientific information.” But if you read Kahan’s paper, you can see that they endorse communicating sound science, but in a way that also takes into account the views of various groups:

As citizens understandably tend to conform their beliefs about societal risk to beliefs that predominate among their peers, communicators should endeavor to create a deliberative climate in which accepting the best available science does not threaten any group’s values.

By now you should be unsurprised that this sentence forms the bulk of one of Page’s magical ellipses.

In addition to misrepresenting the Kahan & alii paper, Page repeats the “too expensive to fix” climate canard. This myth has been debunked many times. For example, in their excellent Changing Planet, Changing Health, Paul Epstein and Dan Ferber summarized the evidence that the health consequences of human caused climate change alone are more than enough to justify the conclusion that acting now on climate change is less expensive than inaction.

Page’s article in The Register is a good example of why it is important to check original sources when dramatic results are claimed. Even reading the abstract of the Kahan & alii article is enough to correct the misunderstandings promoted in The Register. Fortunately, Nature Climate Change made the entire article available online, so you can easily see for yourself what Kahan & alii conclude.