I successfully completed my first marathon last Saturday. Then I finished the last six miles of the race.

For years, I have wanted to run marathons, but until last Saturday never got around to entering one. I usually bicycle (and the past two years, mountain unicycle) a lot more than I run, but this summer I finally started upping my running to prepare for a marathon. Since my increased running was going well, it was time to sign up for a marathon. But instead of entering a normal 42 kilometer marathon, I signed up for the HUFF.

Formerly known as the Huntington Ultra Frigid Fifty, the HUFF is a local 50 kilometer trail ultramarathon race held every December. The HUFF used to be three laps around the Hunting reservoir, but now that trail is closed, so this year the race moved to Chain O' Lakes State Park. I few years ago I learned about the HUFF from a runner who had won the race several times. Ever since I learned about the HUFF, I wanted to skip running a marathon and start with the HUFF. This year I finally signed up. I figured, hey, 50 kilometers is only about five miles longer than a normal marathon, if I can't run the whole thing, I can always walk another five miles. And signing up for a race gave me something specific to train for, instead of only running when I didn't feel like bicycling.

In cycling there is a general observation that you can always double your normal long day. This works out pretty well for cycling and cross country skiing. Upping my distance in cycling and skiing isn't a problem, but there was a limit to how far I upped my running. Now that I've finally found comfortable shoes, upping the frequency of runs wasn't a problem. As usual, I fell a bit behind on my running, but not as badly as other years I've planned on running the HUFF. Instead of doing a number of 20+ mile runs before the race, my longest was fourteen, plus a number of hilly twelve mile runs. So I knew finishing thirty-one miles at once would be hard. But I'd already registered, so now I'd have to try the double-miles rule in a footrace. In the two weeks before the race, I thought of dropping to the Fun Run, but only going for one third the distance seemed too easy, so I decided to stick with the full 50k. Still, I expected to end up walking five or so miles.

On the morning of the race I left early enough that I'd have time for a leisurely check in and packet pickup. I didn't anticipate the 25 minute wait at the park gate. By the time I finally parked, I had to run the half-mile from the lot I was in to the main tent. This broke my rule of always walking a while to warm up before running. After weaving my way through the people waiting for the 10 mile Fun Run, I found the correct check-in table, picked up my timing chip and number, ran back to my car, dropped the race shirt and elbow warmers in the car, pinned the number on, and ran back to the start. Fortunately they delayed the start of the race by fifteen minutes, and I was able to make it to the line just in time to hear the last minute instructions before the gun.

Once the race started, I settled into a nice easy jog that I hoped I could keep up for the entire race. Despite the fact that it was snowing and a little below freezing I felt warm. I actually had my selves rolled up for the first seven or so miles. Even after the stream crossing I was considering dropping a layer at the start of the second lap. 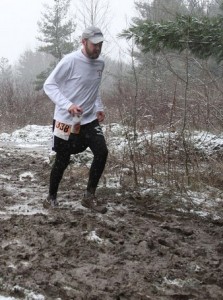 One of the mud spots in the 2011 HUFF. Photo from INMedia Source.

As a cross country skier, I think of the trails at Chain O' Lakes as having lots of gravel spots to watch out for, so I didn't expect the trails to be too wet, but knew there were some low spots by the lakes that often stay muddy. Because of the rain a couple days before the race, the trails were a bit wetter than I expected, but not too bad. There were some mud pits. And a stream to ford. But I was wearing a good pair of hiking socks, so even the stream crossing wasn't too bad. Then we got to some of the lower trails along the lakes. I don't remember ever seeing the water at Chain O' Lakes quite so high. Several sections were completely under water. Not just the ankle deep water I was expecting, there were stretches of knee deep water. And it was still below freezing. The first few flooded trails weren't too bad, but the last water section was the longest and deepest, and it really sucked the energy and heat out of me. But my legs still felt good. After leaving the water, I kept running, but was chilled.

Now, I acclimate to cold very easily,1 so it is unusual for me to feel really cold, but by the half way point I felt very chilled. I stopped in the tent at the half way point and spent twenty minutes warming up. I ate three cups of chili, changed my socks, and filled my water bottle with warmish water. Instead of taking a layer of cloths off like I had been expecting to do, I put on gloves, a thin wool hat, and a windvest. After that, I continued on with the race. I was feeling warm enough again, but didn't have much energy. But other than a lack of energy, I was feeling good and kept going.

Since all the 50 kilometer and 10 mile runners had already been over the trails, the wet spots had expanded into mud pits and the mud pits had expanded into long mud stretches. There were sections that everyone had to walk just to stay upright. Unfortunately, with my lack of training, I ended up walking more than I should have. Miles more than I should have. But I kept going. And going. Eventually, I crossed the finish line.

Before the race, I'd figured I had a worse than fifty percent chance of one of my IT bands locking up in the first two-thirds of the course, but I was able to finish completely uninjured. With all the walking, my second lap took two hours and eighteen minutes longer than the first lap, but I finished. 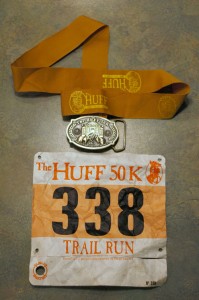 After finishing I spent some time in the tent eating a bunch of the soup and cookies before the drive home. On the drive home, my legs really stiffened up. I could barely walk on Sunday. But after that, my legs have recovered well.

Finishing a very long run on a cold day was a strange feeling. Instead of the kind of tired I'm used to from a hard bike ride, hard work, or a hard ski, this was something different. My legs were completely exhausted, but my upper body felt completely fresh, and I wasn't tired or thirsty. Even my knees feel great. I just had a complete complete lack of energy in my legs. My brain and upper body actually feel perfectly fresh. I think the aid stations really helped with this.

I'm pretty sure one of the things that slowed my training down was that I hate carrying anything when I run, so I just run until I'm really thirsty. But a race like this has well spaced aid stations with very helpful volunteers and good food and drinks, so it was easy to eat and drink enough to more than double my personal running distance record.

312 runners finished the full 50k course, and only fifty or so dropped. Since I was just jogging, not running hard, I talked to a number of people during the race. Of all the people I talked to during the run, they had all run at least a marathon before this year's HUFF. One runner from Chicago hadn't entered a race before last year's HUFF. Many had run the HUFF before. There were even some who considered the HUFF their easy race of 2011.

Next year I hope to to run the HUFF again and knock at least two hours off my time. Skipping the tights and wearing a heavier shirt will help if it is unusually wet again, but it is unlikely we'll have so much rain so soon before the race. I'll also have to either go to the race-day-eve packet pickup or show up even earlier on race day. And I'll just have to resist the temptation to drop my running for cycling.

Now, to continue training to actually run a marathon. There is a trail marathon at the end of April that looks fun....