I just had another run-in with the dreaded capacitor plague. The first case was the power supply in a G5 iMac. This time it was a Samsung SyncMaster 22.5 inch Display. After two years of working well, the monitor started acting up by flickering and taking a while to turn on. Eventually, it completely stopped working. After spending a few minutes ruling out bad cables, I suspected the problem was bad capacitors.

The capacitor plague was a common problem in recent years, causing failures in all brands of electronics, including brands usually known for higher quality components. The problem occurs in electrolytic capacitors (the little ‘cans’ on circuit boards) produced using the wrong electrolyte. The improper electrolyte degrades over time, causing the capacitors to bulge and even rupture. As far as I can tell, this blight was caused because circuit manufacturers trying to save a few cents per board. They did this by buying capacitors that were made using a stolen electrolyte formula that was missing key ingredients. Some of the faulty capacitors were counterfeits of name brands, others were less reputable off-brands. Many of the problems didn’t become apparent until after the one-year warranty period. Some manufacturers slightly extended their warranty for this problem. But the extended warranties were not long enough to catch all the faulty components, as seen in the iMac G5. Even with the short warranties, the counterfeit components cost manufacturers $100 million to repair as of the middle of 2006, when the problem was still ongoing.

Since I’ve seen the capacitor plague before, it was immediately obvious after dissecting the monitor. The capacitors on the power supply board were clearly bulging, though they weren’t leaking goop as the caps in the iMac were. After spending some time browsing the Digi-Key catalog to choose parts, I ordered the highest quality available replacement components. Capacitors are much more expensive when you are ordering one or two of each instead of 2500 or 10000 of each, but the total was still only $3.77. 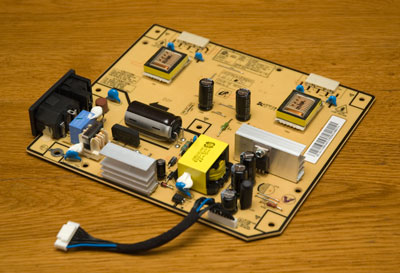 Once I had the components, it only took a few minutes with a desoldering iron to remove the blighted capacitors, then a few more minutes to install the new caps. I was pleasantly surprised at the quality of the power supply’s layout and printing, which made the repair unusually easy. After the easiest repair I’ve done in a long time, I popped the monitor back together, and it worked better than I remembered it working. I guess the plagued capacitors were causing problems before I realised they were. 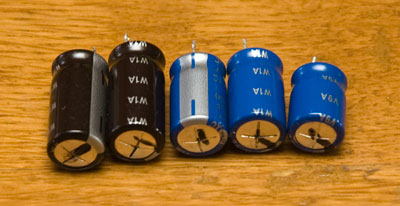 After removing the bad capacitors, I measured their values. They all have a similar error, averaging 62% less than their nominal value.