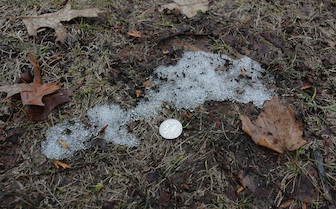 Yesterday the last of the big snow pile disappeared. There hasn’t been any skiable snow in two and a half weeks, but yesterday the last of the big pile of shoveled snow disappeared. This year had slightly more skiable days than the past few years. It was also the first time I remember that little dustings stuck around and added up to enough snow to open the ski rentals at Fox Island. We also had the best “big snow” in years, even though 80 miles north of here it wouldn’t be considered a big snow. This was the first winter I really felt fast on skate skis. I’m not that fast, but my technique has improved so I can hold a higher speed with less effort, and don’t die on the uphills.

This winter also gave me the chance to re-compare ski poles. For the past several winters, I’ve been using relatively inexpensive race-style ski poles. These are a carbon fiber and fiberglass blend that is less expensive than fully carbon fiber racing poles, but are a large step up from fiberglass poles. They have a nice wide glove type cuff instead of a narrow strap, and the pole tapers into a small basket that works well in the thin crusty snow we usually have here in the land just south of real winter. But our “big snow” this winter was the best we have had since before I bought the nicer poles. In the deeper snow, the racing baskets on my normal poles would catch on one of the upper crusty layers, then part way through the push would break through and sink several inches. This limited how hard I could pole. So I got out my old fiberglass poles with full size baskets. The improvement was amazing (but not surprising). Instead of light poling, I could push normally without the basket breaking through the crust layer in the middle of the snowpack. On a well broken in loop that had been taking 20 minutes, switching to the large baskets dropped my lap time to about 17 minutes. What I’d forgotten about the straight shaft fiberglass poles is just how much they vibrate. Every pole plant with the fiberglass poles starts a large vibration in the pole. With the better poles, this vibration is still there, but is almost not noticeable. This vibration wastes energy, but using the larger baskets saved enough that it was worthwhile. Next year I’ll be more willing to bring out the older ski poles.