Just as I finished skiing yesterday, a photographer from the Journal Gazette drove up and took a picture: 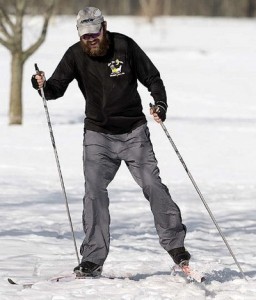 The deep (for Fort Wayne, a little north of here it would be just an OK base) snow from two weeks ago has been through several freeze-thaw cycles that left most of the golf course as a near perfect skating lane. Knowing it would probably be the last ski of the season, I went out hard before the snow turned slushy. Since I only recently started skating, I’m still mastering the technique. The period between when I warmed up and when the snow turned to slush was probably my most consistent and fast skiing with good technique on these skis so far. Then the snow started getting too slushy, and I got tired; but because of the predicted hotter weather and rain, I kept going for a while. Eventually, the slush was too much, so I headed back to where I started. I was tired and having a hard time moving through the slush. I even changed from the moderate V2A I had been skating to a sloppy V1, just to keep above a walking speed on the level ground. Then a photographer showed up and took my picture. Today, it was in the paper.