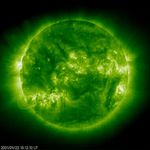 The were a couple points of good news for solar power this week. The first is that solar panels are returning to the White House roof. Solar panels on the White House were an important symbol when Jimmy Carter originally had them installed, and an important symbol of disrespect for the planet when Ronald Reagan had them removed. While solar on the White House under Obama is still largely symbolic, every little addition to the use of solar power helps. In fact, I’m convinced that the proliferation of small scale solar installations is the key to a secure electrical grid and to eliminating the use of non-renewable energy. Now, we need to convert the rest of our government buildings to solar, green roofs, or other energy and resource saving options.

The second piece of good news is that the Marines are continuing the military’s fuel saving effort. Saving lives makes the economics of energy savings even clearer.