It’s amazing how often a little data can overthrow conventional wisdom. Today’s example is term limits. I had long thought that most elected offices should have strict term limits to solve the problem of the same politicians staying in office as a career, loosing touch with their constituents. Thinking about it a bit more a couple years ago convinced me that we shouldn’t have term limits, but should have a maximum number of consecutive terms in a particular office. Some more thinking lead me to realize that term limits can create other problems. Through this whole process I thought that congress was mostly full of the same old people who have been in office most of my life. A post on a blog I occasionally read brought the subject back to mind, and this time I checked the data. I found and plotted the time served by all sitting representatives: 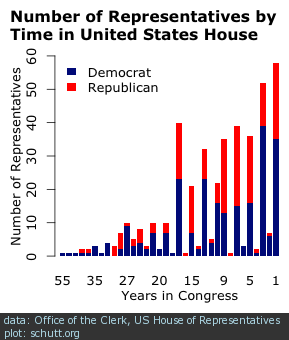 This doesn’t match the distribution I expected. After looking at the House, I examined the results for the Senate: 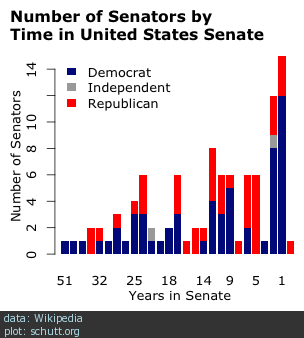 This looks a little broader than the House, but still not quite as biased toward long times in office as I had expected. To be a little more thorough, I calculated basic summary statistics:

It turns out that careerism isn’t nearly as bad as I thought. Of course, the summary stats don’t quite give the true answer, because they don’t take into account that this is the time served so far by those currently sitting in congress. What I really want to see is the total time served by all those now in congress, after they have retired or lost an election. Basically, I’d expect this to show a result slightly lower than the true average.

A little reading shows that the average reelection rate is about 84% (for 1982 to 1994, I don’t have more recent data). Using this number with some simple statistics gives a theoretical mean time in the House almost identical to the average of those currently serving. However, the measured variance is significantly larger than the expected variance.

Now that I have a more accurate view of the makeup of congress, I can look at the reasons behind my previous misconception. The first reason is the number of times I have heard politicians and others talk about the need for term limits. The exaggerated view of careerism is reinforced by the fact that much of the congressional leadership has been in office for years. Since they are the ranking members, they appear to be disproportionately represented in national news stories. The fact that Indiana has only had three senators since I have lived here, and my House district has been misrepresented by Mark Souder since 1995, contribute to the appearance of a permanent congress.

This leads to the question of what should be done. The problem clearly isn’t as bad as I originally expected, but is it really a problem? A year or two ago, I realized that overly strict term limits for the Senate would undermine the purpose of having a bicameral legislature. But what about the House? There is evidence that strict term limits can create new problems. For now, I think that term limits in the Senate are unimportant, and I am undecided about the House. I’ll stick to my general rule of voting against incumbents that aren’t significantly better than their opponent. One final point to remember:

The founding fathers, by the way, did give us the best system of term limits there is. If you don’t like what they do, vote 'em out.
--Jack Lessenberry