Since they are in the business of selling gasoline-powered automobiles, the manufacturers understandably are reluctant to come out and publicly announce the obvious solution to air-poisoning by the gasoline engine: Get rid of the gasoline engine. On the other hand, every member of the industry is actively engaged in trying to do just that. --W.E. Butterworth, Wheels and Pistons

While editing down the number of books I own, I found Wheels and Pistons: The Story of the Automobile, a history written for middle schoolers that my grandmother gave me years ago. It is a 1971 book championing the car and car companies, and how the number of cars on the road and miles driven demonstrates the USA is better than the Soviet Union. The chapter on the future is interesting. It mostly talks about turbine and steam engines, but also mentions electric and hybrid gas-electric cars, showing a couple Ford and GM experimental cars. 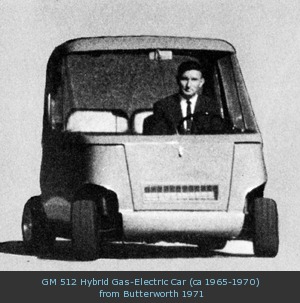 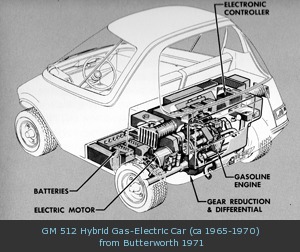 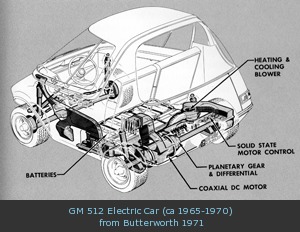 From the pictures, you can see that GM was treating electric and hybrid technology as a play technology, for use in toy cars. The examples of turbine engines in the book are installed in production cars. This fits well with my understanding of the history of the automobile, where GM has kept up enough research on modern technology to not fall too far behind, but does so in a way that they never have to actually sell a car that could cut into gasoline car production. The book also shows a similar Ford of England Comuta electric car.

It is worth to noting that Wheels and Pistons was published two years before the first oil embargo, and that GM still does not sell an electric or viable hybrid car. (I’m not counting the EV1 beause they were destroyed at the end of their leases, or their current hybrid options because of sub-par performance.)

This is a good time to put in another recommendation to read Edwin Black’s Internal Combustion, an excellent history of the car.