I was able to spend some time in Sweden and Denmark a while ago. Other than the fun of traveling, the trip was to look at the differences between Scandinavian countries and the United States. One of the first differences I noticed is that they use four phase traffic lights instead of the three phase signals in the US. Instead of red → green → yellow → red, they use red → red-and-yellow → green → yellow → red. The extra red-and-yellow stage comes a few seconds before the green light. It took a little while to figure out what this extra red-and-yellow meant. As soon as I figured it out, I realized that all stoplights in the US should change to this system as soon as practical. 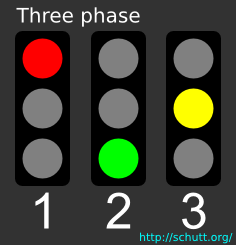 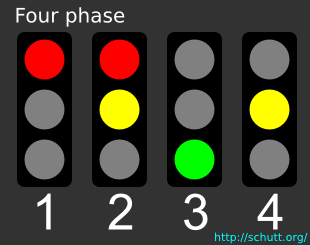 The four phase system is superior. The fourth phase gives drivers advance warning before the light turns. This lets everyone know when traffic is going to start moving. Drivers have time to shift into gear, and can start driving almost as soon as the light turns green. This helps eliminate the slinky effect we see at every light in the US. Here the typical situation is: the first driver is not paying attention, and takes a while to start, then the driver behind takes a while to start, and so on. If there is much traffic, these delays can make it so that only the first few cars make it through the intersection. When people are talking and texting on cell phones, it is even worse. In Sweden, everyone can see that the light is about to turn green, so they can be prepared to start before the light turns. Everyone can start at almost the same time, allowing more people through the light. This contributes to a smoother flow of traffic than we are used to in the US.

Smoother traffic flow means that the same speed limit (set by light timing) produces higher average speeds. Hard breaking and hard accelerating with traffic lights leads to lots of time spent stopped. The increased awareness provided by the fourth phase allows everyone in line at a light to start over a much shorter time, lowering the time spent stopped. By lowering the time spent stopped, the average speed of traffic increases. This means you can get where you are headed sooner. This system has the added benefit of saving fuel in two ways. The gas burned while a car is stopped is completely wasted because in isn’t helping you reach your destination. With smoother traffic, less time is spent stopped, so less gas is wasted. The second savings is partially because of driving style. In the US it is common for a light to turn green, and the first and third car to immediately start moving. The second driver isn’t paying attention, and takes a while to start. This causes the third driver to slam his brakes on. The second driver then starts moving, then the third can start again. Driver two’s inattention has cost him gas, but has cost driver three even more gas. The delay also slows all drivers behind, wasting more gas. By giving advance warning the light is about to turn, it is easier for traffic to start smoothly and keep flowing.

A four phase system should also improve safety. With traffic flowing faster and more smoothly, there are fewer chances for a driver to rear-end a car stopped at a green light. There are other potential ways for this to improve safety, but most require an improvement in driver attitudes in addition to better traffic engineering.

Since I began telling people about four phase traffic lights, I learned that there are a few in Maryland and southern Pennsylvania.

It would be really fun to prove that four phase traffic lights are superior, but time is limited, and I’m sure someone else has already done the work. Even without rigorous demonstrations, I’m sure that switching to four phase signals is a simple and inexpensive way to improve the flow of traffic, and will have a short payoff period.