If you are reading this, you probably already know that I really like bicycles. I frequently bike to work, and go on several rides each week. Two years ago I switched the type of saddle I ride. My current saddle is a Selle San Marco Ponza. I can easily ride on it for hours very comfortably. It had the bonus of being the stock saddle on several models of bikes sold at the local shop. Many people never use the stock saddle when they buy a new bike, so there are plenty of new ones in the take-off bin at the shop. 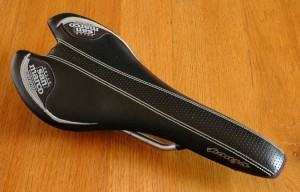 When I leave the lab early enough, I occasionally ride with the racing group from the local bike store. The usual route is to take the greenway out of town and do laps around the reservoir. This is a 60 kilometer ride plus 16 km per extra lap. I usually just try to stay with them as long as I can. The last ride I was able to go on, we took an alternate route that goes south 35 km to the nearest hill, then zigzags across it several times before heading back. The whole ride is 110 km or so. About 25 km from the end, my saddle started squeaking. Two kilometers from the end, one of the rails broke. 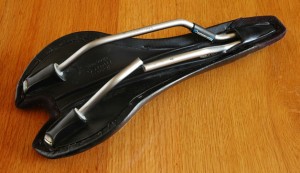 I’m glad it didn’t break until I was almost back. I up-shifted and finished the ride standing. I’m not sure why it broke. The split is just behind the clamp on the seatpost. This is probably the point where a seat rail is most likely to break. The break caused a burr along the end of the saddle clamp. I filed it down, then polished it so that it won’t damage my next saddle. This was the first time I removed the stock seatpost from my Cannondale CAAD8 bicycle. I was surprised at how light the shaft is, but how heavy the clamp is. With the closest hill being 35 km away, a few extra grams doesn’t matter.

Fortunately, I have an identical saddle on my commuter bike that I can put on my road bike, and a different saddle for my commuter. It is odd that it broke, but I’m glad I wasn’t further from home or in traffic.